ArticleToday—April 26th, 2022—marks the 200th anniversary of the birth of Frederick Law Olmsted. Join us in celebrating his legacy and contributions to landscapes across the country!

A birthday celebration is in order! Frederick Law Olmsted was born on this day in 1822 in Hartford, CT. Today, he is remembered as the founder of landscape architecture and celebrated for his contributions to landscapes across the country. For those in Boston, we have Olmsted to thank for many of the city’s most widely-used green spaces, including Back Bay Fens, the Riverway, Olmsted Park, Jamaica Pond, the Arnold Arboretum, Franklin Park, and more.

Our current exhibition, More or Less in Common: Environment and Justice in the Human Landscape, has been timed to coincide with this bicentennial anniversary. Let’s take a closer look at a few maps from our current exhibition and in our digital collections that document Olmsted’s projects in Boston.

The 1877 map below shows an early plan for Back Bay Park, what we now call Back Bay Fens. The blue lines trace out the winding routes of the Muddy River’s former delta. The attached newspaper advertisement notes an 1878 competition “for the best Plan for laying out the Back Bay Park.” The winning entry was simply a plan for a formal flower garden, which the Parks Department discarded, calling instead on the skills of the visionary landscape architect Frederick Law Olmsted. Olmsted’s eventual design for the park system called for a naturalistic style that echoed Romantic era ideals of bringing the countryside into the city.

One of Olmsted’s most imaginative ideas was a continuous chain of parks running from the from the Charles River to Dorchester Bay. The 1897 plan below shows how Franklin Park and Marine Park (Castle Island) would be connected by a boulevard running down Columbia Road. However, this section of the “necklace” was never realized, blocked in part by property owners and speculators who had already developed the land along this route. Today, neighborhoods like Brookline and Jamaica Plain near the completed sections of the Emerald Necklace are far more affluent than the diverse part of the city traversed by Columbia Road. Environmental justice advocates see this corridor as an opportunity to invest in urban design that serves the needs of the surrounding community.

Created in 1900, the map below shows the locations of trees, shrubs, and pathways in the Arnold Arboretum. The Arnold Arboretum’s design was the result of a collaboration between Frederick Law Olmsted and amateur horticulturalist Charles Sargent. Situated on the former site of the Bussey family farm, the Arboretum was established in 1872 with the bequest of James Arnold, a New Bedford whaling merchant. In 1882, Harvard and the City of Boston reached a unique arrangement: Harvard transferred the Arboretum’s land to the City as part of its public park system and in turn, the City leased the property to Harvard for a thousand years, leaving control of the collections with Arboretum staff.

The next series of 4 maps—documenting Back Bay Fens, Olmsted Park, Jamaica Pond, and Riverway—were published in 1986 by the Commonwealth of Massachusetts Department of Environmental Management as part of the Olmsted Historic Landscape Preservation Program. The program was born in the 1980s out of “a national awareness of how remarkable the Olmsted firm’s contribution to American history and the urban environment had been.” Created under the program, each map “document[s] the original design intent, use, appearance and integrity of the parks” as part of the 1989 Master Plan, which “provides a preservation framework to guide all future planning and action” of Olmsted parks. 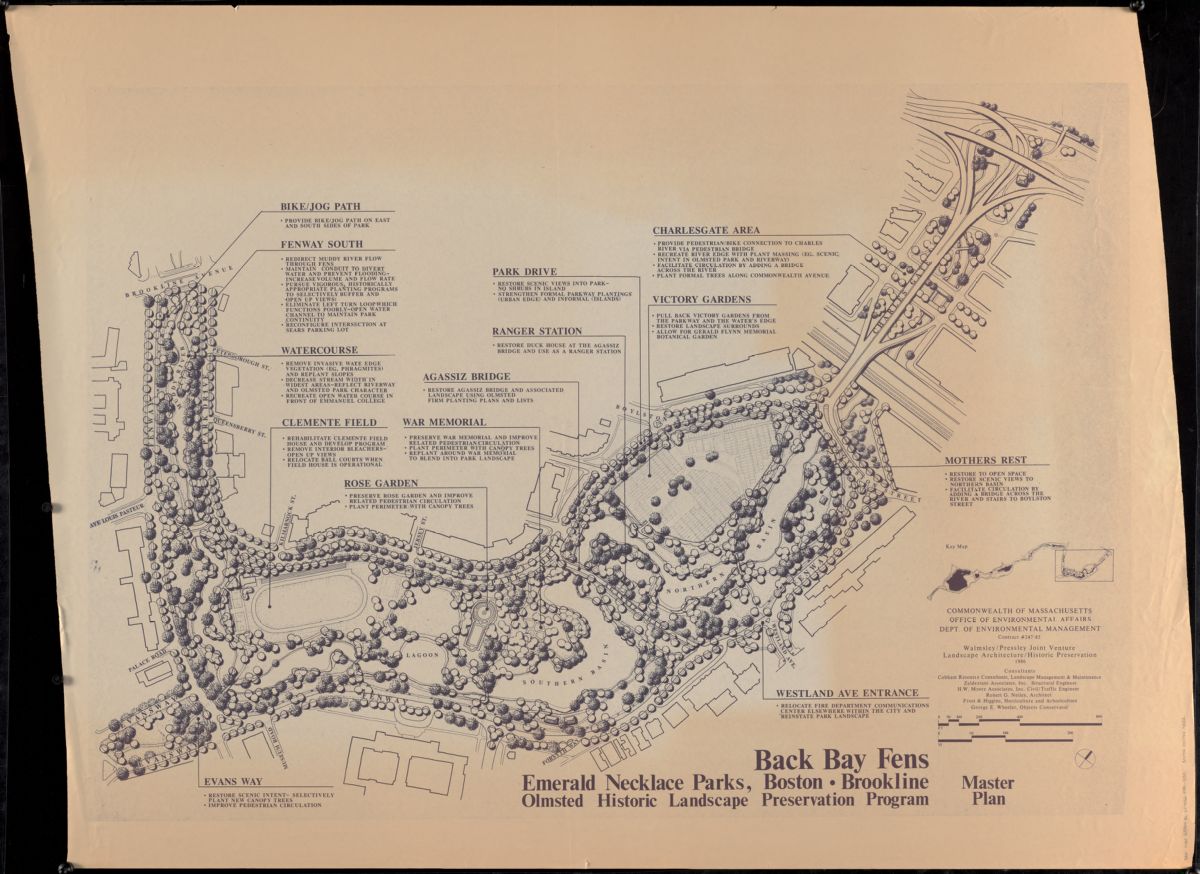 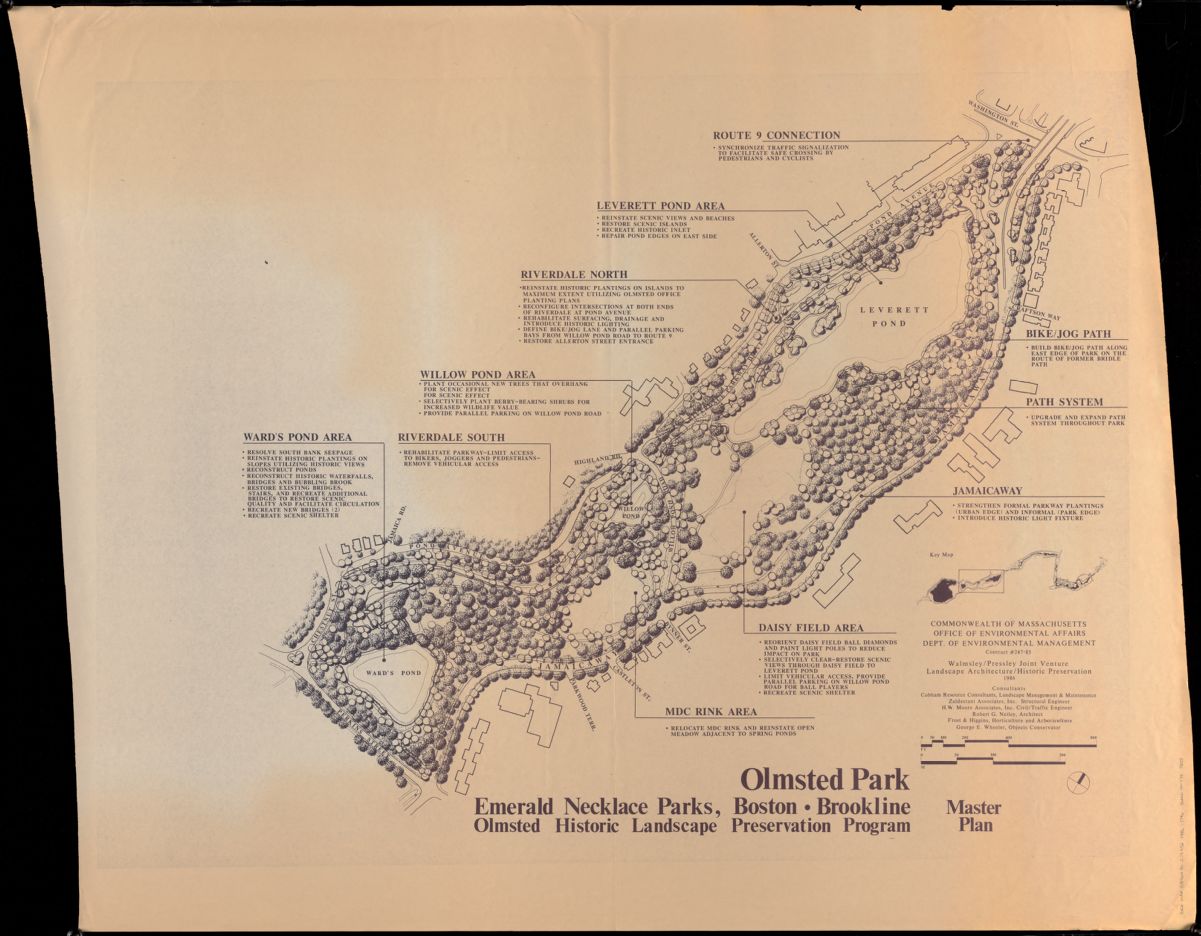 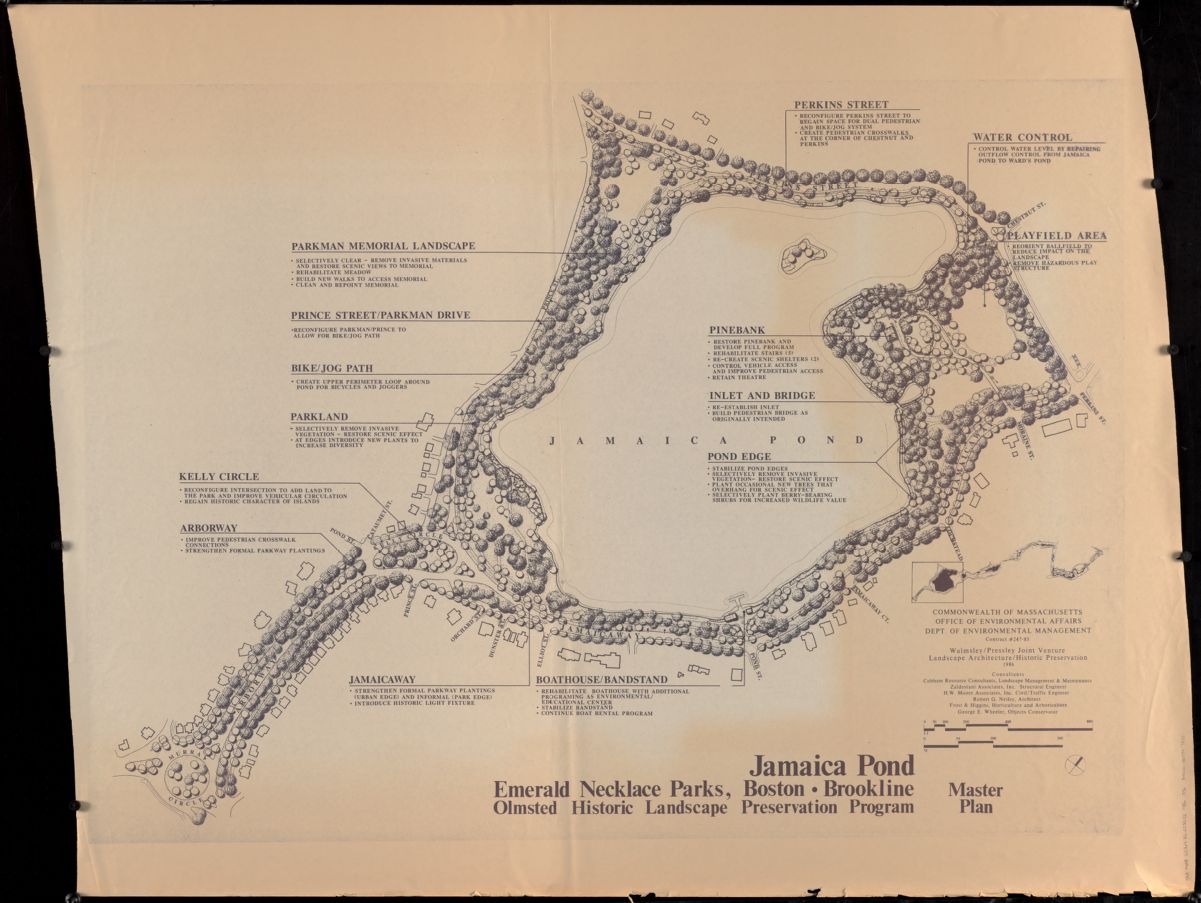 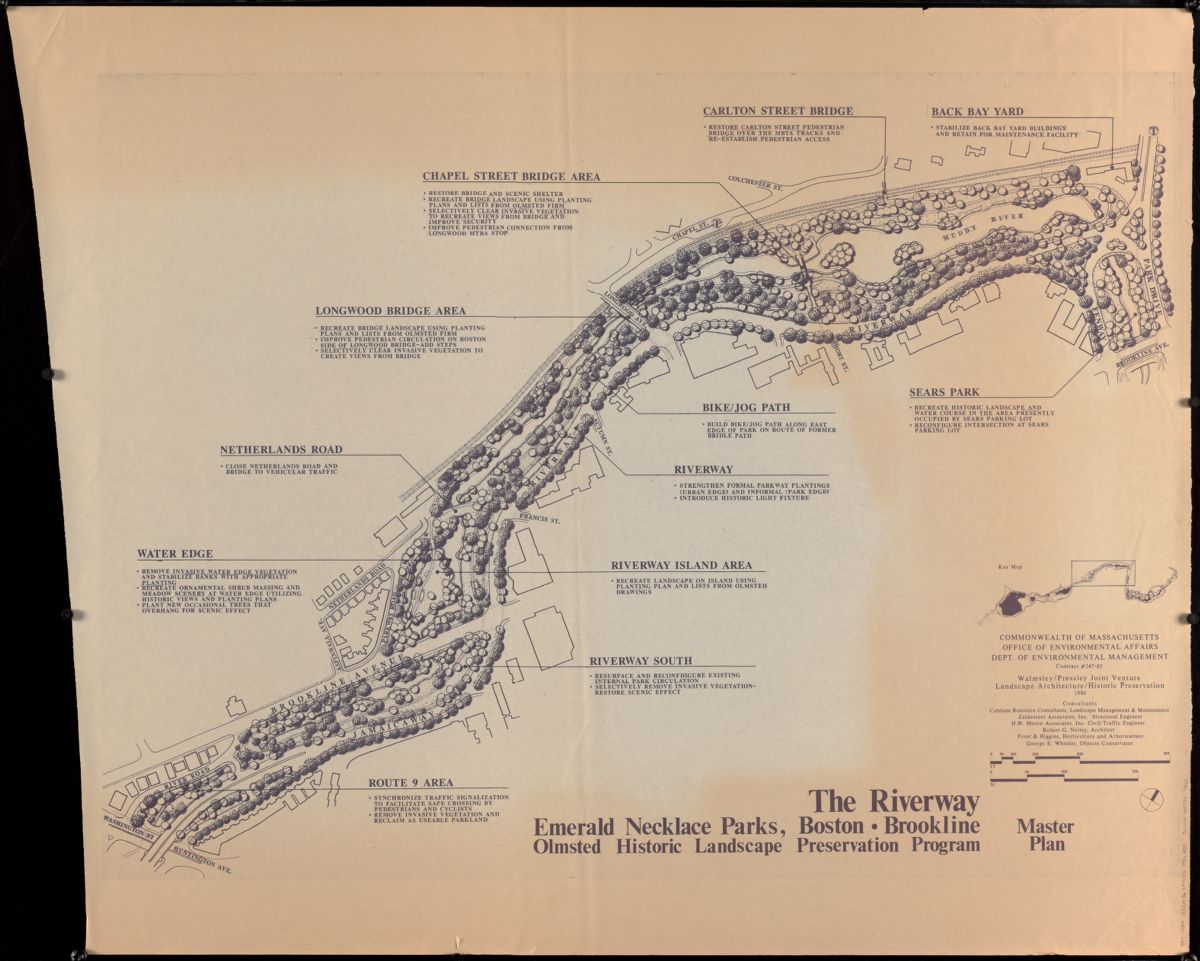 Want to see any of these maps in person? Visit our gallery Monday-Saturday or book an appointment in our Rare Maps Reading Room! 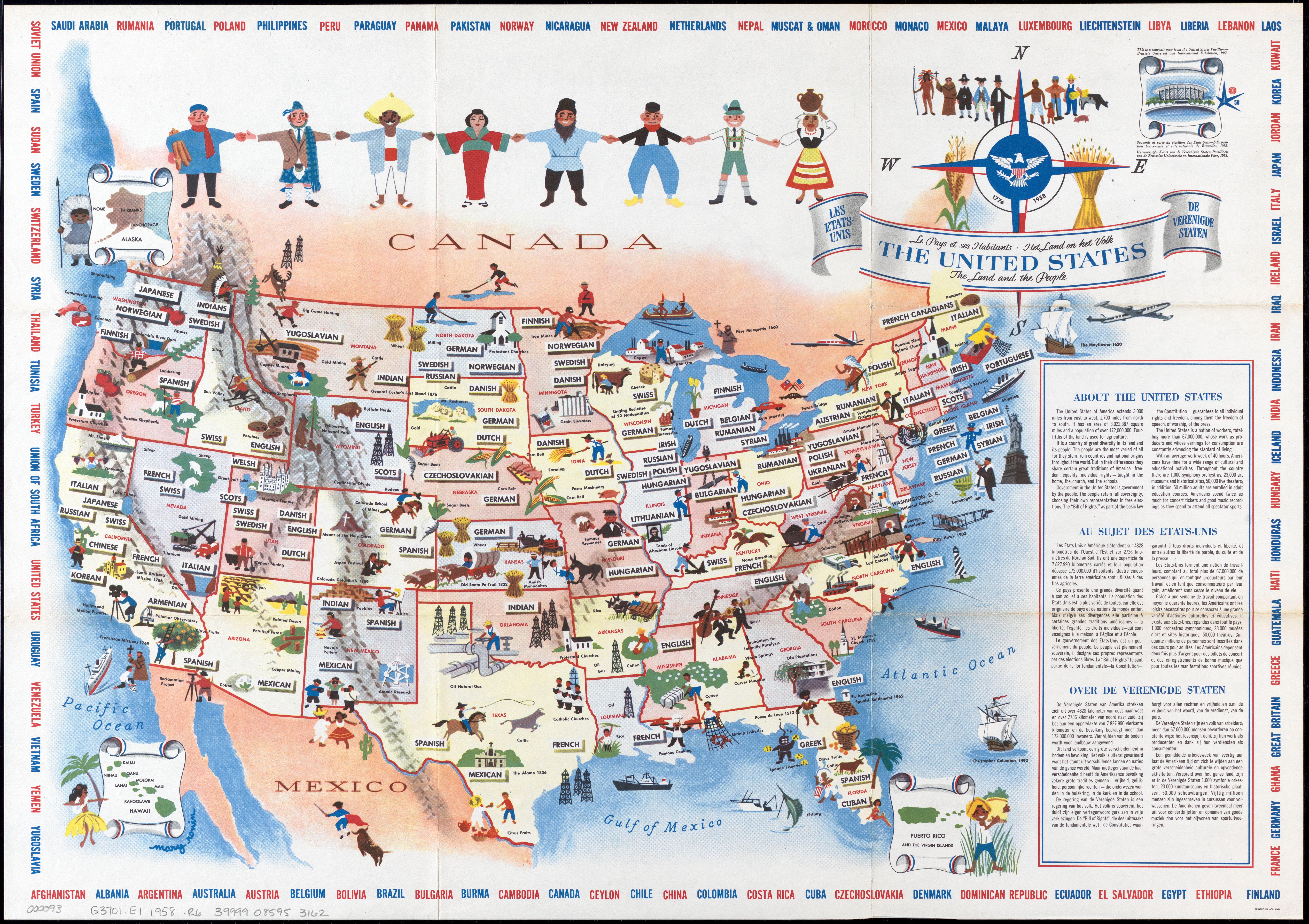