Today’s entry in the #30DayMapChallenge is “boundary,” and we certainly live in a part of the world that has plenty of examples of bizarre and confusingly defined boundaries. European colonists ran arbitrary lines of political division through territories about which they knew almost nothing, inserting geographic placeholders for areas of future expansion. In doing so, they ignored Native settlement and often set up future conflicts over ambiguous territorial definitions.

The colonial charter for Massachusetts Bay defined its northern boundary in relationship to the Merrimack River, at a time when the English didn’t realize that the river’s course turns north from its east-west orientation about 40 miles inland, running deep into what is now New Hampshire.

When the Merrimack River’s course was finally better understood by Europeans, the grantees of the New Hampshire colony protested against Massachusetts claiming territory so far north. In 1740, King George II decreed that Massachusetts’s northern border would follow a three mile arc north of the Merrimack’s course until reaching “a point due north of Pawtucket Falls.”

But where was that point, exactly? The surveyor George Mitchell was sent to find out, and, in 1741, produced a map that appears in our Digital Collections. At the point three miles north of the falls stipulated by King George, Mitchell found a pine tree. He marked it “Pitch Pine Tree” on the map that he submitted as evidence of having settled the definition for the confusing boundary. Mitchell swore in an inscription on the map that he had drawn the boundary as precisely as possible to match the King’s decree:

The “Old Boundary Pine” thus became the official waypoint for where the border between the two colonies—and later the two states—turned from following the river to following the compass. Sometimes marked on maps as the “station trees” and oftentimes illustrated with a symbol of a tree, the point became fixed into the legal definition of this boundary. And that boundary line lives with us today. If you’re on one side of the “Old Boundary Pine,” you vote, pay your taxes, and follow the laws in a different state than if you live on the other.

The pine itself is long gone, and now geographic coodinate systems are used to pinpoint locations and boundaries in a global system of measurement. In 1890, however, the authorities installed a stone pillar commemorating the site of this famous boundary tree. Read this geocacher’s blog post to see a photo of the marker—which includes an engraved illustration of the pine tree that once stood on the point. 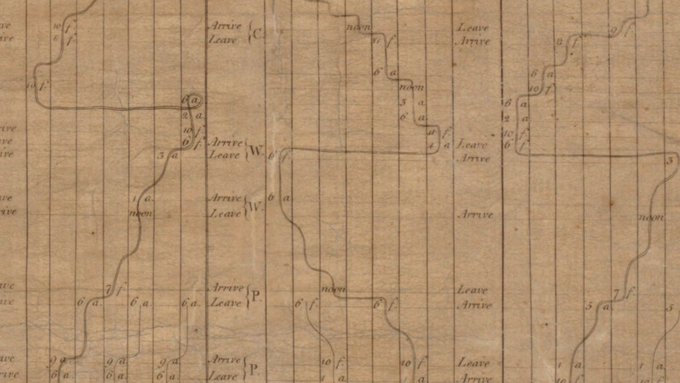 Riding along the mail route map

Sizing up the map with Insizeor

Boston's Oldest Buildings and Where to Find Them—on Atlascope